London Assembly report on ‘Everyone In’ highlights Thames Reach’s work

The cross-party London Assembly Housing Committee have released their report on ‘Five Steps to Build on ‘Everyone In’ in London’, highlighting Thames Reach’s work with people experiencing street homelessness. 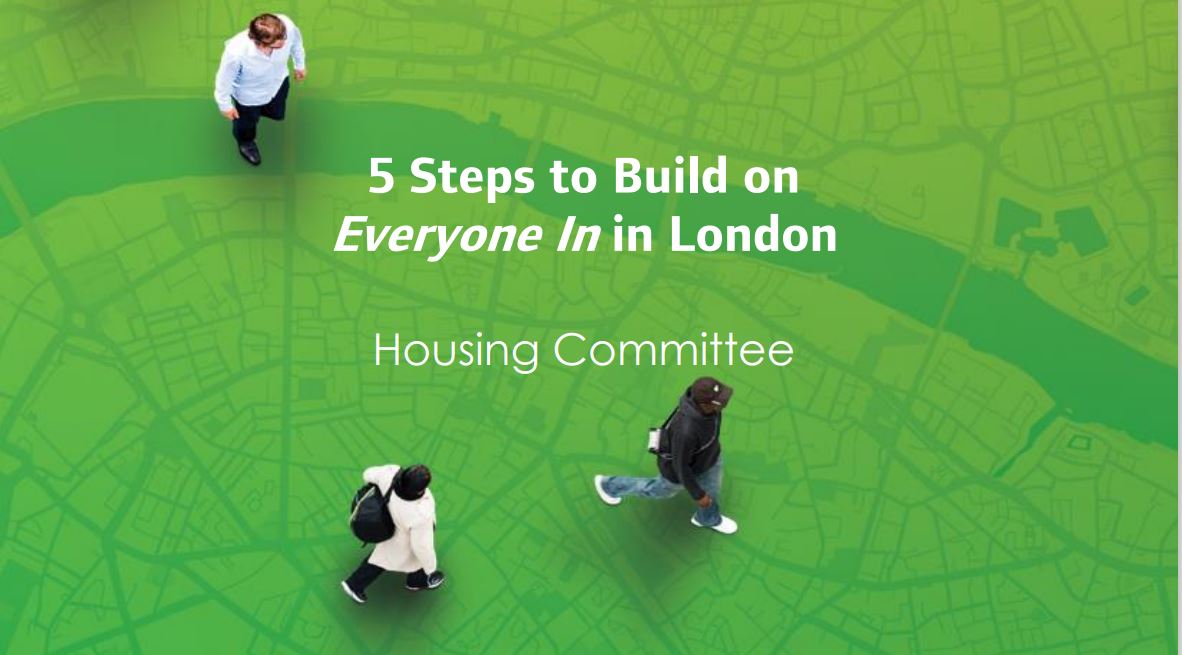 The London Assembly Housing Committee has released its report on ‘Five Steps to Build on Everyone In in London’. It takes a thorough look at the current landscape of rough sleeping in London, and the legacy left behind by the ‘Everyone In’ initiative. Highlighting that rough sleeping in London has increased by 170% in the last decade, the committee has produced at set of recommendations for the Mayor of London and government alike in order to reduce the devastating impact of street homelessness on people’s lives.

The cross-party Housing Committee examines matters relating to housing in London and takes a lead on scrutiny of the Mayor’s Housing Strategy.

The report takes a close look at numbers of people spotted rough sleeping in each quarter of the year, and breaks down these statistics to understand more about the people behind the numbers: their demographics, their support needs, and what brought them to the streets. This report has a particular focus on the first three months of the year, when the economic and social impact of the first lockdown manifested in an unprecedented increase in the numbers of people seen sleeping on the streets.

The report also deals with the response to this, particularly the provision of temporary accommodation (the ‘Everyone In’ initiative), and the Greater London Authority (GLA) and charity response to this.

Audrey, a Thames Reach support worker at Deptford Reach who was seconded to one of the hotels we ran during ‘Everyone In’, is interviewed on page 18 of the report:

“While supporting clients in the hotel, I was able to see that clients engage more with support staff than they do while working at the day centre. A client that I had difficulty engaging with before COVID was identified by the London Street Rescue team as a rough sleeper. The client had no identification, no bank account, and no job. The client was in the hotel from April to September. I met him in the hotel, and he engaged with me rather quickly. After completing an assessment with him, and understanding his predicament, I was able to support him to obtain an ID, a bank account, and Universal Credit. Currently, the client is living in private rented sector accommodation.

Working with the client helped him to realise that he neglected himself and had not taken care of himself properly. He told me that he would “take care of myself now,” and this goes to show how much he has learned from his experience rough sleeping.”

At Thames Reach, we find it encouraging that the Plan Points stated at the end of the report are already very much engrained in Thames Reach’s mission of ending street homelessness, in particular the cross-sector collaboration and the tailored solutions for people with high support needs, which we outlined in our recent statement outlining our vision for 2021.

Thames Reach have seen that people have continued to come onto the streets since the first lockdown, and while ‘Everyone In’ has ensured that the first group of people experiencing homelessness were temporarily housed and provided with support from our teams such as Private Sector Lettings (PSL), the people we work with are not a static population, and that the need for effective prevention work is greater than ever.