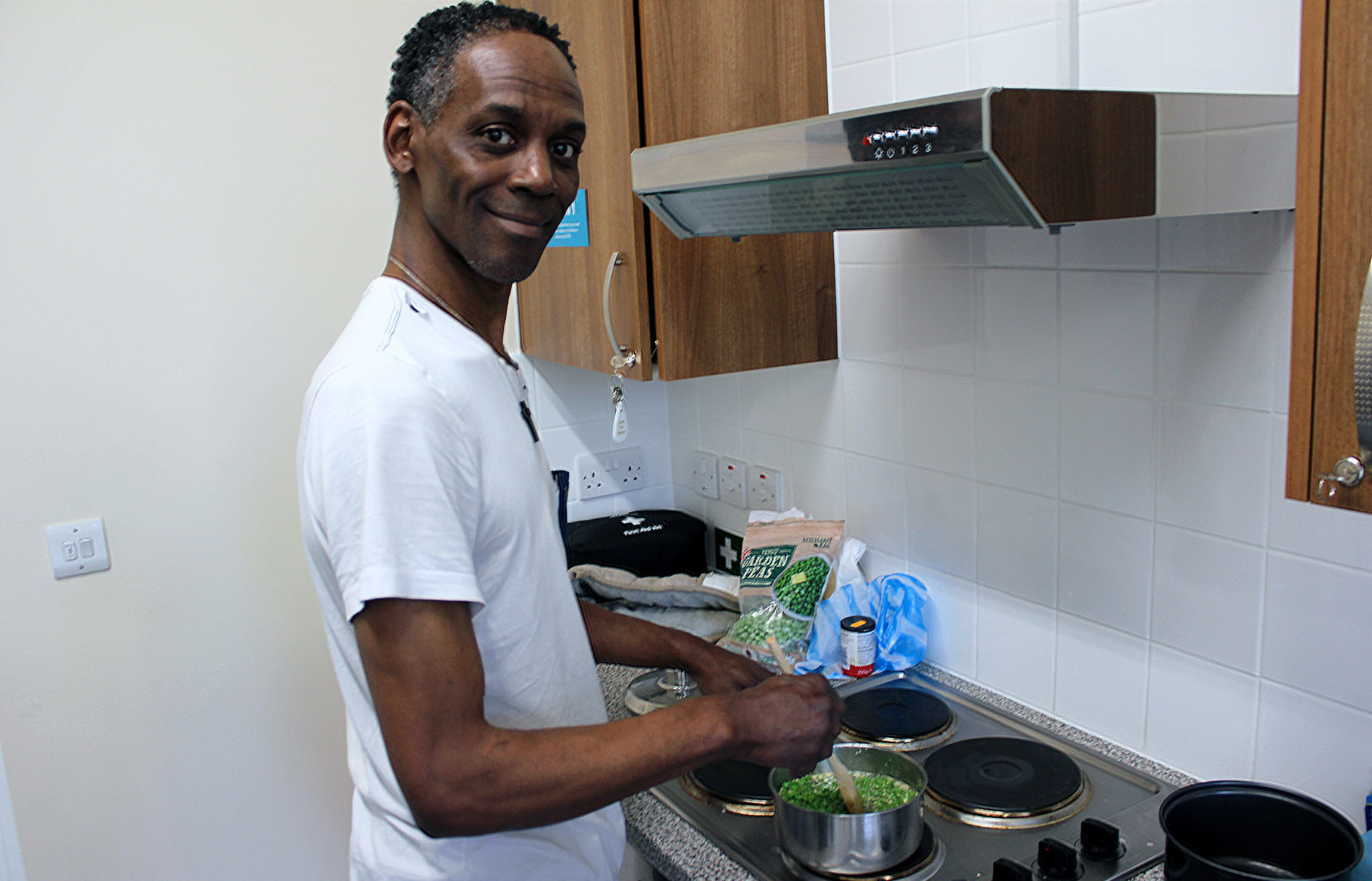 The classes are run by Thames Reach service user Rohan, an experienced chef who learnt his trade in a family restaurant. Rohan went on to work in a number of professional kitchens before he began using Thames Reach services. Now he’s enjoying the chance to share his culinary knowledge.

“Doing this gives me an opportunity to thank Thames Reach for their support. I find I have something worthwhile to fill my time with and I hope that some of the knowhow that I try to impart reaches home,” he said.

During the classes, Rohan demonstrates a recipe that the residents then follow and make for themselves. Recently, they’ve cooked curry goat, sausage and mash, Jamaican patties, lasagne, southern fried chicken, and fish and chips.

“Cooking is an experiment. I want to encourage people to cook and develop their own tastes. I try and make the dishes varied and interesting. A lot of Caribbean stuff. Also English fare. We do vegetarian too,” Rohan said.

Robin is a support worker at Thames Reach Greenwich, the service that oversees the Greenwich Hub. He helped to set up the class, along with a range of other activities at the site. “This is a great opportunity for our residents to get involved and build their confidence and social skills,” Robin said. “People can take steps forward and learn useful, practical skills like cookery, where you can eat healthier and save a bit money.”

The Greenwich Hub, run in partnership by Thames Reach, L&Q Living, and Greenwich Council, provides specialist support for up to 12 residents who have previously slept rough and have connections to the local area.

“Tenants are here for either 13 or 26 weeks, so it’s great if they can pick up some skills like cookery and get in the habit of eating healthily. The classes build camaraderie. People can help each other out. They can come along and have a chat, have some fun. We’ve got service users who are here week in, week out,” said Robin.

Chris, a resident at the Greenwich Hub, attends the classes every week. “I’ve been coming since it started. I love it,” he said. “I enjoy cooking anyway, but Rohan has given me a lot great hints and tips and it’s really helped me feel a lot more confident.”