The Pathways into Management programme started in January, encouraging members of staff to develop their skills to move into management roles at Thames Reach. We spoke with Miracle, one of its participants, to see how it’s going 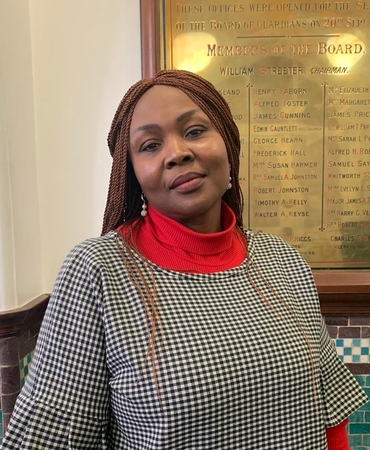 We spoke to Miracle Godfrey, Senior Practitioner, who is one of the members of staff currently on the Thames Reach Pathways into Management programme, which is providing a group of staff with the skills and confidence to develop their career further in the organisation. 2020 is the programme’s first year, so we caught up with Miracle to see what she wants to achieve from the initiative, and how it’s going so far.

I’ve been with Thames Reach for eight years; up until November last year I was doing night shifts at the Waterloo Project. I enjoyed it and was very comfortable doing this but sometimes when you get used to the role you’re in, you start to feel like you need a challenge. After a while I realised that people praising me for being good at my job meant that I should be aiming for a more senior role.

So while I was working at Waterloo I applied for a secondment as a Senior Practitioner elsewhere at Thames Reach, and was given the job at Newham Stepping Stone, a new, temporary project. The “manager’s role” really felt like a step up and helped me believe in myself and build my confidence as well as helping me move forward in my career.

When the opportunity of the Pathways into Management programme came up, I thought about it and said “I don’t think I can make it, I don’t think I’ll be chosen”. It was in the back of my mind until two days before the deadline, but then I sent an email to HR to see if I could still apply, and still wasn’t expecting much. Then a couple of weeks later I found out I’d been accepted; I was really pleased and shocked.

The Pathways into Management programme is going really well so far. After I found out I’d been accepted, colleagues are saying I’m lucky to be on the course but it’s not luck, you have to push yourself and find opportunities to aim high. Aside from learning new things, it’s a real opportunity to voice your feelings; it’s not a formal setting, you can hear others express themselves while contributing your own experiences. It’s a confidential and safe space. Everyone has ideas that pop up all the time.

The first day of the programme I was impressed, it really feels like you’re not alone. I was impressed by what Bill [Tidnam, Chief Executive] had to say and his own growth, how he was comfortable in his role for a long time but applied for more senior roles at Thames Reach and kept himself motivated. I don’t want to look back now; even though it’s good to reflect, I want to aim higher, and the programme is really helping me with that, I feel very empowered.

I would like to improve on my communication and listening skills; I know that the way I communicate needs adjustment. If my service isn’t made permanent, I’m aiming for a managerial role elsewhere in Thames Reach. I am going to do it, I’m really motivated now!

I would like to say that I really appreciate the programme and would like to thank those who put it together and their hard work. It’s going beyond improving staff for Thames Reach, it improves your own development and your own skills. I’ve already noticed improvements in my interactions with colleagues and external agencies.

Learn about careers at Thames Reach

A Day in the Life of a Support Worker